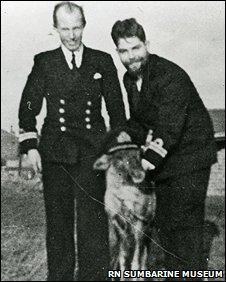 Historians at the Royal Navy Submarine Museum in Gosport are remembering one of the more unusual moments of World War II.
In 1941, the crew of HMS Trident were given a reindeer as a gift by the USSR navy.
The 56 crewmen spent six weeks sharing their already confined living accommodation with the fully-grown reindeer nicknamed Pollyanna
Wartime tale
While on operations, fighting German forces in the Arctic Circle in 1941, the British crew of the T-class HMS Trident were given a gift of a reindeer by a Soviet naval admiral.
Bill Sainsbury from the Royal Navy Submarine Museum said: "The Russians were so grateful to the British especially at the time when no-one else was helping them - and this was all they had to give.
"The story goes that the British captain had mentioned his wife had trouble pushing her pram through the snow in England - and the Russian admiral said 'what you need is a reindeer!'. And I suppose because it was a gift, they didn't want to seem rude by refusing it."
On board
Living with a reindeer underwater in wartime conditions inevitably posed challenges for the crew. A barrel of moss given by the Russians soon run out and Pollyanna lived on scraps from the galley. She also developed a taste for wartime favourite, Carnation condensed milk.
Pollyanna was originally lowered into the submarine through a torpedo tube of the sub and it was hoped she could sleep in the torpedo and food store. However she apparently had more refined tastes and insisted on sleeping under the captain's bed.
Bill Sainsbury said: "There are lots of funny stories - apparently when the submarine surfaced for air, she would barge her way through the narrow corridors to the main hatch to get some fresh air before returning to the officers' mess."
Despite Pollyanna eating a navigation chart, the crew made it back to the UK where HMS Trident landed at Blyth in Northumberland.
However as the reindeer had over-indulged on condensed milk, she had actually put on weight and could not be fitted out through the torpedo tube.
Dry land
A dockside winch, with some assistance from a crewman with a broom, finally managed to get Pollyanna squeezed out of the submarine and onto dry land.

Pollyanna died five years later, ironically within a week of her old ship, HMS Trident, being decommissioned and scrapped in 1947.She was given to Regents Park Zoo (now London Zoo) where she lived out the rest of the war - although whenever she heard a loudspeaker or siren she was said to have ducked down as if she was still on the submarine.
HMS Trident would have been a regular visitor to Portsmouth, the UK's main base for submarines during World War II. Gosport's Royal Navy Submarine Museum has HMS Alliance, a similar World War II era sub to HMS Trident, on permanent display.
As part of a festive weekend at the start of December 2009, the museum offered children the chance to visit Santa inside the sub, and although no reindeer was be squeezed down the torpedo tube, a barrel of moss was left in the torpedo store in recognition of one of the Royal Navy's most unusual passengers during World War II.